“Less is more” is the monthly selection of Les Vins Célestes. I introduce 5 of my favorite healthy, natural wines through the tasting, the growing methods and the estate. 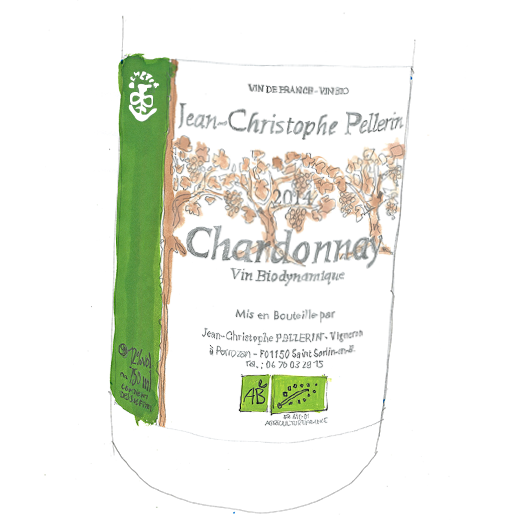 Elégance-sur-Bugey – Jean-Christophe Pellerin is a wine grower installed in the Bugey. Wines of the Bugey remain rather confidential in the French wine-making landscape. At the beginning of the 20th century, there were about 7000 hectares of vineyard, what made it an area of relatively important production. Further to the phylloxera then to both world wars, today, there is no more than 500 hectares of vineyards among which 70 hectares driven in organic culture.

The 100 % Chardonnay is a nice surprise. A very fine and elegant white, with a well-managed roundness, from calcareous soils. Biodynamic reveals seductive floral notes with a hint of local herbs as well as invigorating minerality. On finish, I found slightly aniseed notes such as fresh fennel.

One after the other, tastings of such wine bring invariably the same pleasure. It works well with fera fish tartare, a chicken and green olives tajine or a vegetables wok subtly spiced. At the aperitif, it is an easy-to-drink wine and you will never see the bottle emptying… a good sign, of course!

The estate – Domain Pellerin is situated in Perrozan close to Saint-Sorlin-en-Bugey, roughly thirty minutes from East side of Lyon. Jean-Christophe Pellerin grown in a wine growers’ family and cultivates 5 hectares.

The vineyard is cultivated according to the principles of the biodynamic farming since 2009, natural treatments include plants preparations such as tisane but also homoeopathy, herbal medicine and essential oils. The biodiversity is sustained on the entire estate by supporting the interaction between botanical and animal species and maintaining life-balance strengths necessary for the good development of the vines.

Copper and sulfur are lightly used in the vineyard with a minimum sulfur level at bottling. Wines are neither filtered, nor fining. In order to reveal all aromas of these wines, it is recommended to open red ones up to two hours in advance. 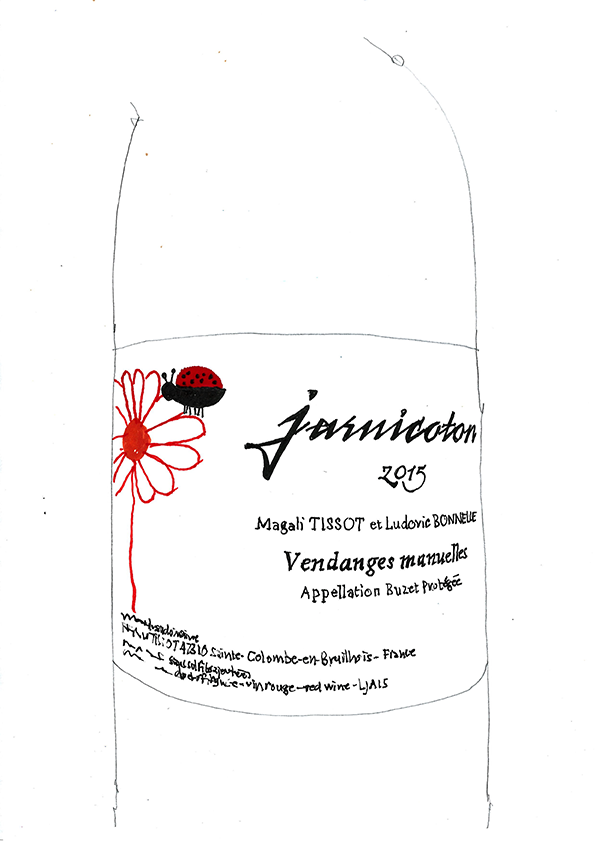 To extend the summer – I visited Ludovic Bonnelle and Magali Tissot at Domaine du Pech last July. The opportunity to discover atypical wines from the AOC Buzet on this isolated hill (“pech” is for a heightened and flat place in local language, the Occitan) surrounded with the estate’s vineyard.

Jarnicoton is a wine to drink while it is young, slightly chilled in the summer. Ludovic Bonnelle considers it as the rosé of the house! And it was raised accordingly: short vinification in tank for pure pleasure of light fruity notes! A wine for friendly gathering together with South France-style salads, homemade tabbouleh and why not spicier dishes such as lamb chops roasted in curry.

Jarnicoton is produced mainly from small yields of Merlot grapes and always manually harvested as for all the grapes of the estate.

The estate – Created in 1978, Domaine du Pech was driven by Magali’s father, Daniel Tissot, native from Jura and exiled in Southwest France – and born in a well-known wine growers’ family in Jura. In 2000, the estate was taken over by Magali and Ludovic. Today, it represents about 13 hectares. It was up to twenty hectares a few years back, but, as often, Ludovic proceeds with a lot of freedom and against preconceived ideas. Thus, he chose to reduce the vineyard size to favor the biodiversity by creating vegetable hedges in borders of the vineyard, with the project to create additional copses at the heart of the vineyard, where animals will have a role of regulator against pests.

In the winter, grounds’ life is maintained by ovine herds evolving freely in the vineyard until life resurfaces at the beginning of the spring. These grounds are worked a row on two in light horse’s plowing.

Concerning the vine’s care, Magali and Ludovic chose to work the more they can with local plants in coherence with the farmer’s approach of the biodynamic growing. So, infused plants, such as the yarrow, are pulverized in the vineyard according to the climate of the year, of the vegetative stage of the vine or according to the capacity of infused plants to limit the development of the parasites of the vine. These cares allow to reduce considerably the use of the sulphur which is almost never used when bottling, hence a particularly demanding work in the cellar to deliver healthy and pure wines which express the complexity of their terroir. In the cellar, wine making process is pretty long for premium wines because the time is given to the wine to express all its potential before the bottling.

As for a number of biodynamic estates, Domain of Pech works about 80 per cent with foreign countries where the biodynamic farming and natural wines are still better understood than in France.

Beautiful. Raw. Brilliant – A powerful and spirited wine. Another way of understanding wine: to make it, to drink it. Heat and aromas overflow from Clos de T. As for Domaine du Pech, wine making process can be very loooooong: up to 5 years! Bottled in May 2016, the 2011 was on its best during the tasting last August. Personally, I drink it for itself, outside any lunch. But carnivores will appreciate it with grilled cured beef.

The estate
Situated on the foothills of the Mount Ventoux, Southern East France, Clos de Trias is a vineyard of about twenty hectares with a majority of Grenache (95 %) including old vines of more than 80 years for certain parcels. With an altitude situated between 300 and 500 meters, weather conditions are favorable to structured and powerful wines but benefiting from the freshness of the mistral (local North wind) and from the night-temperatures. At the end, it gives rather well-balanced wines.

Even Andreas Bakke took over the estate in 2007 which was previously driven in conventional farming. From the beginning, he decided to convert it in organic growing and obtained the French certification in 2012. But his approach goes beyond simply applying the principles of organic farming: he is very close to the thought of Rudolf Steiner, father of the biodynamic growing, and Masanobu Fukuoka, author of The One-Straw Revolution, a founding book of the natural agriculture that has inspired the permaculture’s movement. Thus, the intervention of the wine grower is reduced to the minimum on all the parcels, simply making sure to guide the vines to obtain healthy grapes at harvest period.

Native from Norway, Even Bakke traveled for a long time before settling down in the Southeast of France where he found the ideal playground. Having experimented the large range of technologies applied to the vine growing in a previous life of winemaker in the United States, he has now chosen to listen to the nature, guided by his intuitions in search of the pure expression of the beautiful Triassic terroir which gives the name to the estate. 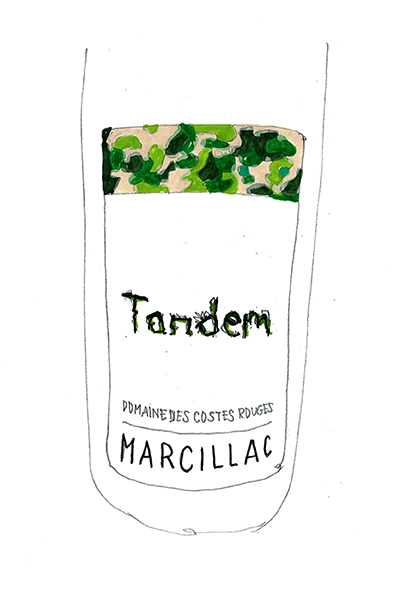 An easy to drink one! – I rediscovered Fer Servadou during a recent stay in Rodez, Aveyron. Fer Servadou is the iconic grape of Aveyron and especially used in the AOC Marcillac. In Tandem, it gives a wine with a stimulating acidity.

Sparkling and fruity notes in the mouth, currants with a hint of dried herbs, it is pleasant fresh wine. Bottled in its youth to keep the fresh and fruity feeling. Served slightly chilled in the summer, it will be the perfect match during the aperitif as well as for light lunch of homemade terrines and Aveyron’s salads.

The estate – Planted on the family lands since early 90s, the 7 hectare vineyard is on a clay and sandstone soil rich in iron oxide, called rougiers, which have given their name to the estate (red hillsides). The owners, Claudine and Eric Vinas began the organic farming in 2007, certified since 2012. Today, the vines are covered with grass between rows and sowed of auxiliary plants. Vines receive only one organic amendment during the year. Wine making process happens in concrete tanks and wines are bottled without filtration. Domaine des Costes Rouges proposes 4 cuvées among which a red one made from old vines (60 years) and small yield, Clos Ferrière, raised over 18 months. A more complex and rich wine, presenting a good potential for ageing.

The AOC Marcillac is located in the Northwest of Aveyron. Originally, the vineyard was concentrated around the monastery of Conches, in the North of Rodez, established in the IXth century. The monks were used to offer wines of local production to the visitors. What contributed during several decades to the development of the vine growing.

Then, devastated by the phylloxera in the turn of the 20th century, the region known then the exploitation of iron ore until the 30s, abandoning then temporarily the vine growing. Today, talented wine growers propose atypical and very aromatic wines everywhere in the region, often coming from organic vine growing and at sweet price. 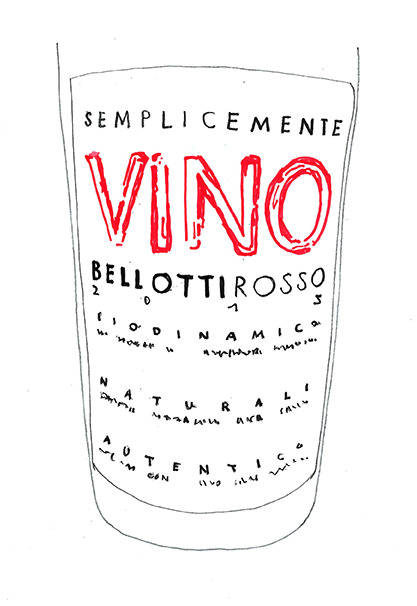 Simple pleasures – Why to write about Stefano Bellotti’s wines while everything about them has been already said, and certainly better than I will do it here.

Simply because, more than any other wine, Stefano’s wines are a very personal journey to special feelings. Because his wines are deeply connected to my discovery of natural and alive wines. My experience of these wines is intimately linked to Italy, from Piedmont to Sicily via Tuscany. It is on these lands that my tastes evolved in contact of some of the greatest natural wines. There, I better understood the human commitment behind such wines and what could be the true expression of a terroir (the ground, the wildlife, the nature). An intense emotional feeling.

I just have to put my nose on a glass of Semplicemente or to take the first swallow and here I am, transposed into the Piedmontese hills surrounded with this luxuriant nature. What an experience to find this in you glass!

With Stefano Bellotti’s wines, there is no filter. His wines are not seductive wines. You have to accept them as they are: spontaneous, rustic, intense. Stefano is a guide, he accompanies the grape to the bottle, without technology, nor additive, to pass on the truth of his parcels.

The wine is a little filtered, without added sulphite, issued from biodynamic vine growing. A mix of Barbera and Dolcetto, red clay soil, exposed southwest (the top!). The grapes are harvested at the best maturity to keep a fruity sensation. It is a substantial wine. 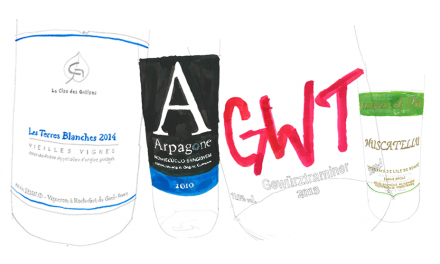 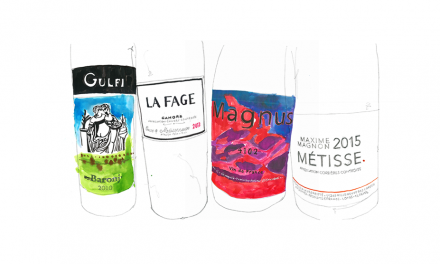